…as South-East women gather in Owerri for Tinubu/Shettima

Women, this is your time, you will enjoy and have seats at the table.”

365Daily– Sen. Oluremi Tinubu, the wife of the All Progressives Congress (APC) presidential candidate, Asiwaju Bola Tinubu, has assured that women will have more representation in government if her husband, Asiwaju Bola Ahmed Tinubu, is elected in February 2023 presidential election. 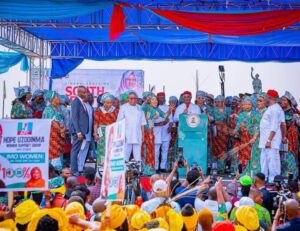 Addressing thousands of women who gathered for the event, she also allayed fears about religious intolerance and regional  bias, stressing the importance of national unity.

Disclosing that her husband has never impeded her religious freedom, she stated: “We will deliver on all we have promised Nigerians and even more. I am a pastor and a deaconess and my husband has supported me all the way in my religion. Nigeria is beyond religion or tribe. 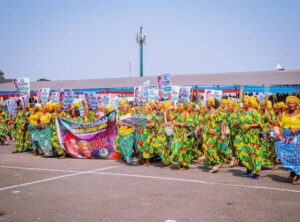 “We love the Igbos and we will do our best to bring prosperity to the East and give women all the support and employment they need. Women, this is your time, you will enjoy and have seats at the table.”

She further spoke on her husband’s human development credentials, saying that he has mentored and contributed to the growth of many irrespective of their ethnicity, religion and gender.

Going further, she lauded the leadership capabilities of his running mate, Senator Kashim Shettima, whom she said invested greatly in people-oriented projects during his tenure as governor of Borno State. 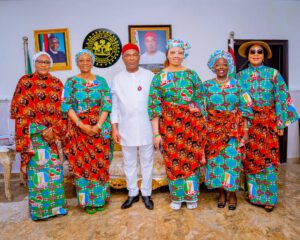 In her address, the national women leader of the party, Dr. Betta Edu, urged women in the South-East to canvass support for Asiwaju Bola Ahmed Tinubu. She also gave assurances of his commitment to supporting women through different economic initiatives.

The South-East Zonal Coordinator of the APC Presidential Women Campaign Team and First Lady of Imo State, Barr. Chioma Uzodimma, reiterated the commitment of women in the region to support the APC and work for the party’s victory. 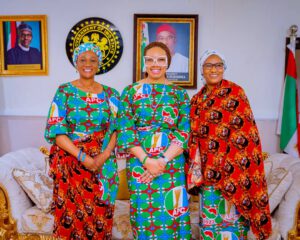 “This is the second time in three months that women in the East have come out to pledge support for the party. First during the peaceful one million women march and now the women’s rally,” she said.

Governor Hope Uzodimma, in his address, urged the people of the South-East to not be left out by participating in ushering in the Tinubu/Shettima administration. 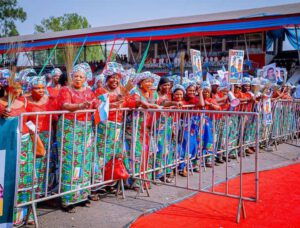 Other APC women at the event include the co-chairman of the Tinubu/Shettima Women Presidential Campaign Team and wife of the APC vice-presidential candidate, Hajiya Nana Shettima; wife of the Speaker of the House of Representatives, Mrs. Salamatu Gbajabiamila; the First Ladies of Cross River, Borno, Plateau and Kogi States, Dr Linda Ayade, Dr Falmata Zulum, Mrs. Regina Lalong and Hajiya Rashida Bello; Chairman of the NNPC Board, Senator Margrey Okadigbo; Deputy Chief Whip of the House of Representatives, Hon. Nkiruka Onyejeocha; Federal Commissioner representing Enugu State, Hon. Ginika Tor, and many other high ranking APC women from the region.

On arrival in Owerri, the women paid a visit to the palace of Eze Imo, where they were warmly received.