The Vice-Chancellor, University of Abuja (UniAbuja), Prof. Abdul-Rasheed Na’Allah, has called on youths, especially students, to be hardworking, shun all forms of indiscipline and not allowing distractions take over their future.

Na’Allah made the call on Wednesday while declaring open the 2022 First Award Winners Lecture titled: ‘Informal Art Education, Lessons From The Harmattan Workshop’.

The lecture was organised by the Governing Board of the Nigerian National Merit Award (NNMA) in conjunction with UniAbuja.

According to him, the primary responsibility of NNMA is to identify and assess candidates for their merits based on their outstanding contributions to national development in the areas of Science, Medicine, Engineering, including Arts and Culture.

He urged students to focus on their studies and desist from vices such as cultism, examination malpractice, drug abuse, indecent dressing and other unruly behaviour, which he described as destructive. 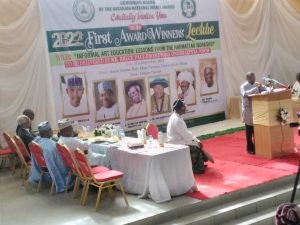 The vice-chancellor further advised youths to make maximum use of their skills to be self employed and not to allow themselves to be used for social vices in the society.

However, Mr Bruce Onobrakpeya, who delivered the lecture, said Art education via informal art workshop was important in the sustainable development of the art as a viable socio-economic subsector in any country.

Onobrakpeya said informal workshops touches the grassroots, develop the environment, culture, economic well-being and opportunities for self employment for the development of the society.

He said they also create meeting points for people of divers socio-cultural backgrounds where ideas, special knowledge and wealth of unique experiences were exchanged.

Onobrakpeya, who is also a world renowned master print maker, painter, sculpture, poet and pioneer in modern African arts, said a lot had been written on Informal Art Education.

“Informal Art Education is the training that occurs in a relaxed and free atmosphere of instructor-students interaction with no syllable, permanent structure or teaching faculty.

“Notable examples of informal art institutions in Africa and South of the Sahara include the cyrene mission centre in Zimbabwe and Poly Street Art centre in South Africa,” he said.