Maik Nwosu, a Professor of English and Chair of the Department of English
and Literary Arts at the University of Denver, is prolific. After working
as a journalist and receiving the Nigeria Media Merit Award for Arts
Reporter of the Year and Journalist of the Year, he went on to get his Ph.D
in English and Textual Studies. His writing about Africa, African Diaspora,
postcolonial and world literature has been published in many academic journals and books.
Additionally, he has written his own poetry, three novels and a collection of short stories.

What courses do you teach?
“The classes I teach are mainly on African,
postcolonial, African Diaspora and world
literature, as well as critical theory and
semiotics… Some of these courses are
transhistorical and transcultural, and I like
that. Some others, like ‘Africa’ and ‘The
Black Imagination,’ are quite challenging
because of the scope, and I love that too. In
addition, I teach international travel classes that take students to different parts
of the world—to London and Liverpool
in 2014, then Accra and Elmina in 2017. I
also love those.” 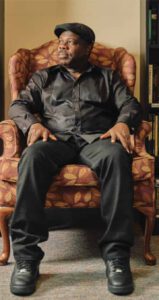 What did you do professionally before
you became a professor?
“I was a journalist for about 12 years,
mostly in Lagos, Nigeria. I started on the
Arts desk, then later the World desk. I also
covered social and political issues.”
What is your writing process?
“I play around with ideas, then block out
some time when possible and sit down
and write. Quite a number of my creative
works were written during residential
fellowships in Germany, Italy and South
Africa. Sometimes too, I write only a few
minutes or hours a day or even a month
or more until the work is finally done.
As a creative writer, I love to experiment
with forms, and I’ve written poetry, short
stories and novels. Five of these have been
published—one poetry collection, Suns of
Kush; one short story collection, Return to
Algadez; and three novels: Invisible Chapters, Alpha Song and A Gecko’s Farewell.”

What makes a good writer?
In my class on global modernism and my
fiction workshops, I sometimes reference
that part of William Faulkner’s Nobel lecture where he talks about his work and the
inclination ‘to create out of the materials
of the human spirit something which did
not exist before.’ The truly outstanding
writer often has a bold sense of form and
channels that into creating a new vision of
the world.”

How do you help your students prepare
for a career as a writer?
“I emphasize the significance and
function of form. Content is, of course,
important. I often refer my students to
the Gabriel García Márquez interview in
which he describes the profound effect
that Franz Kafka’s Metamorphosis had
on him or his writing because of Kafka’s
‘narrative method.’ I sometimes have
students write the same story in different
ways to further highlight the function and
effect of form.”

Do you have any book recommendations
for our readers?
“This Summer, I reread or read Ngũgĩ wa
Thiong’o’s Wizard of the Crow, Bernardine Evaristo’s Girl, Woman, Other, Italo
Calvino’s Invisible Cities, José Saramago’s
Blindness, David Diop’s At Night All Blood
Is Black. I recommend them.”