The advice to beneficiary is the issue of maintenance culture, one of the pains of Nigeria is that we don’t maintain facilities”

The COAS gave the charge while inaugurating a newly-built official  resident of  Regimental Sergeant Major (RSM ) of the  Nigerian Army  School of Infantry (NASI) in Jaji Military cantonment in Kaduna state . 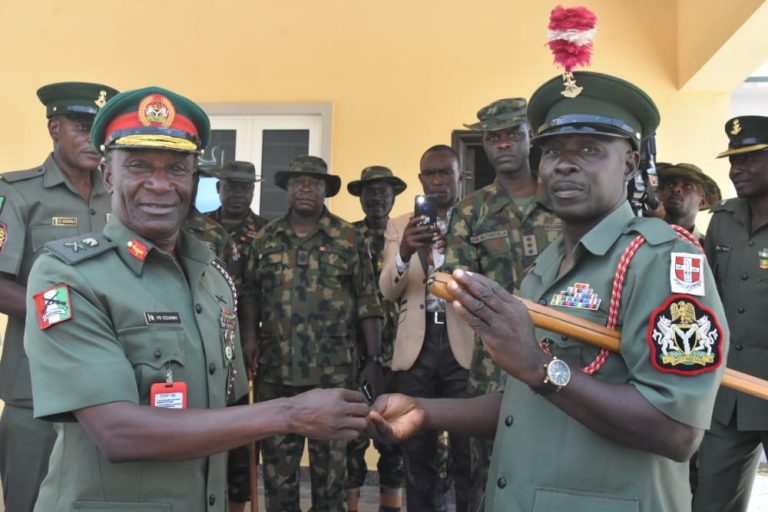 Ezugwu said , “The COAS  in his quest to restore the dignity of the senior cadre of the soldiers, has started a policy to give a befitting residence to all regiment sergeant majors of all the divisions and all the corps, all the schools in the army up to battalion level.

“Just to dignify the office of regimentals sergeants majors  because they are the highest ranking soldiers among the soldiers corps. So he has kept his promise.

“He has delivered one to the RSM of the Infantry  Corps headquarters and he had delivered this one to the NASI RSM.

“And you can see it is a very well furnished and well constructed building just to make him put in more in his job and to encourage younger soldiers to aspire to the highest office among soldiers that there is something that is waiting for you.

According to him, this is phase one, phase two will be the vehicle, the vehicles are in two parts; first is an official vehicle which is a Hilux car, second would be another Hilux that he is going to use when he is to retire.

“So I want to express our gratitude on behalf of the entire Infantry Corps and  Commandant NASI,  to the Chief of Army staff for keeping his promise to go into this project and we are very happy about it.

“The advice to beneficiary is the issue of maintenance culture, one of the pains of Nigeria is that we don’t maintain facilities, I have spoken to him and  he has given me his word he’s going to maintain it”.