These are certainly tetchy times. The illusion of patriotism may be high in restraining one from describing Nigeria as a failed state in the face of the circumstances.

From the flurry of expressions and reactions by the government and its officials on the recent attacks on the troops of 7 Guards Battalion and 176 Battalion of Brigade of Guards, Abuja, you may run into the assumption that this is one incident that will make the nation stand up firmly to the idiocy of the rampaging terrorists.

The insurgents had on Sunday, July 24, ambushed troops attached to the Brigade, as they were conducting patrols in Bwari area Abuja, following intelligence that the Nigeria Law School, Bwari, might be attacked.

The soldiers were responding to the distress call by the School authorities and residents of the area when they came under attack. Various figures have been bandied on the number of personnel lost in the encounter. An Army Captain, a Lieutenant and five soldiers were however reported as victims.

The attack spoke much. The Brigade of Guards, is an elite corps of soldiers responsible for the security of the President. The offensive at the troops, came less than three weeks after the advance security team of the President was ambushed in Dutsinma axis of his Katsina State, on Tuesday, July 5, when he was to go on Sallah holiday. It was the same day that the Kuje Correctional Centre that is within shouting distance from the seat of Government, Abuja, was attacked and over 64 Boko Haram Commanders released from the facility.

As if these were not enough, the Nigeria Security and Civil Defence Corps (NSCDC), during the week, placed all its state commands on alert, following intelligence reports that Boko Haram terrorists and Islamic State West Africa Province (ISWAP), had perfected plans to attack Abuja, and five other states, including Lagos.

In obvious panicky response, the government has asked all the Federal Government Colleges in the FCT to proceed on holidays. Also, the call to Bar ceremony by the Nigerian Law School, was on Wednesday, July 27, moved from Bwari to the centre of the City. The next day, Thursday, some soldiers were reportedly killed when Boko Haram terrorists raided a military checkpoint around Zuma rock in Niger State. The location of the attack, is few meters away from Zuba along the Abuja-Kaduna highway.

These are certainly, tetchy times. The illusion of patriotism may be high in restraining one from describing Nigeria as a failed state in the face of the circumstances. The truth however, is that we have hit all the indices precedent to state failure. With near total infrastructure collapse, reign of impunity at all levels of governance, debilitating poverty among the people, deplorable economic situation, corruption in all aspects of national life, rising spate of insecurity and menace of armed gangs in virtually all parts of the country, we are on the verge of going under. It is not for nothing that we have in the last five years, been consistently lumped in the same league with Iraq, Afghanistan and in some instances, Somalia. More than any other time, the country presently fits into the gory picture painted of it by one time West African Correspondent of the London Independent, Karl Meier, in his book, “Before This House Falls”. Without mincing words, the entity called Nigeria, is falling.

If you had taken good note of two sordid incidents that took place somewhere around Kaduna and Zamfara in the last few weeks, you would understand the extent we have been laid bare and deflated as a nation. In the Kaduna affair, Nigerians who were kidnapped in the Abuja-Kaduna bound train on March 28, were videoed being flogged and subjected to unimaginable forms of torture by their abductors. One of the terrorists was even overheard, threatening that they would soon come after President Muhammadu Buhari and other high state officials. Nothing could be more humiliating for a nation. 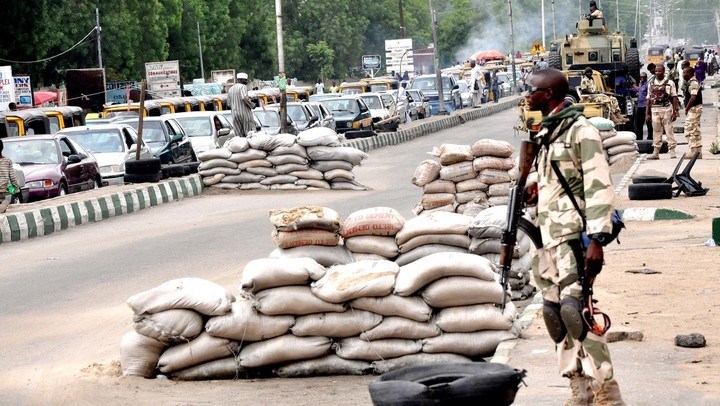 In Zamfara, on Saturday, July 16, a leader of bandits, Adamu Aliero, was conferred the title of Sarkin Fulani (the chief of the Fulani) by the Emir of Yandoton Daji, Aliyu Marafa, in a carnival-like ceremony said to have been graced by government officials and other prominent persons in the state.

Traditional rulers, district heads, the security adviser to the state governor, Abubakar Dauran, the state commissioner for security and home affairs, Mamman Tsafe, Tsafe Local Government chairman, Aminu Mudi, were among the dignitaries said to have attended the event.

Forget about the order by the governor, Mohammed Matawalle, suspending the Emir for the action. It was mere bravado and a face-saving exercise. It was, after all, the same governor that issued the tepid directive to the citizens of the state, some days ago, to arm and defend themselves against the onslaughts of the bandits. He does not even stay around the state to protect the people or experience what they are going through in the hands of the insurgents.

I can imagine the Emir boxed between the axiomatic devil and the deep blue sea in the hands of the terrorists. The options were clear to him; recognise the authority of the terrorists or get crushed with his subjects. It must have been that awful feeling of despondency that drove him to the desperate step of conferring a title on a known criminal. He may therefore, not be blamed for taking what in the circumstances, appeared a reasonable action to save his people and his head, having been abandoned by the state. Similar situation had occurred in Katsina and Borno, where indigenes paid ransom to bandits for their freedom. They were all captives of sorts. There is no better definition of serfdom in modern times. But this is where we are, as a people.

Insecurity has become our lot. There is hardly any day that people are not killed in various numbers and for various reasons in the country. Perhaps, more than any other factor, it is this rising culture of insecurity that is rousing the question on the continued existence of Nigeria, as a country. No matter how hard the leaders try to paint or bend things, the situation in the country, is dire and clearly getting out of hands.

The attacks on the Battalion of the Brigade of Guards, Kuje Prisons and the President’s advance team, are ominous. The threats of attacks on other cities in the country, are equally worrisome. They are pointers to the extent of our vulnerability to external forces and the lapses in intelligence.

So, when President Muhammadu Buhari and his aides claim before the world that Nigeria is in safe hands, their audiences know that they are lying. They can only mock and giggle at them. The truth, is that this house, called Nigeria, is falling. Some even say it has fallen. Whatever it is, the situation calls for the President and his team to come down from their high horses to face the realities in the land. There is need for another look at the security arrangements in the country.

• DURU, is the Editor of TheNiche Newspapers, Lagos