Musa said this on Friday in Maiduguri when he spoke with newsmen on recent successes recorded by the command under “Operation Desert Sanity” and “Operation Lake Sanity”.

“The Theatre’s kinetic and non-kinetic activities have partly compelled some Boko Haram Terrorists (BHT) to seek alternatives to terrorism thereby taking advantage of other avenues to surrender.

“Currently, a total of 70,593 persons consisting of BHT (JAS/ISWAP) fighters and their families have surrendered to troops. 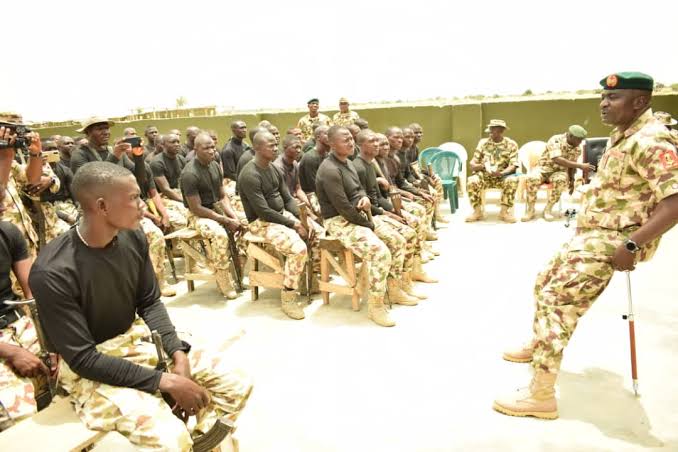 “The Theatre in conjunction with the Office of the Attorney General of the Federation, has commenced reviews of cases of detainees at the Joint Investigation Centre (JIC),” he said.

Musa added “Some of the detainees have been cleared and handed over to the Borno Government and UNICEF.”

He said that within the past one month the military have conducted several operations on land, maritime and air, where over 60 terrorists were neutralised and over120 arrested including their suppliers.

“A typical example was the arrest on July 13, of one Mr Haruna Fulani and Umaru who were suspected logistics suppliers to BHT Commmader Ali Ngulde at Mandara Mountains around Gwoza general area.

The theatre commander said that the sustained onslaught and rainy season have led to destruction many terrorists camps and enclaves forcing them out of thier comfort zones, adding however, that the terrorists have found ways to sustain their explosive attacks, as well as attacks on some isolated communities and other soft targets.

He reiterated the commitment of the command to maintain effective synergy with the Multi National Joint Task Force (MNJTF) and work in unison with the Maritime and Air components, paramilitary establishments, state governments, humanitarian agencies, local communities and the media for success.

Musa also announced the re-opening of Maiduguri-Damboa Road on July 18 to ease economic activities and movements of people and goods.

The News Agency of Nigeria (NAN) reports that highlight of the briefing was the presentation of three Chibok girls rescued by the troops during the period under review.