Skip to content
General News
The Lagos State Police Command on Saturday said investigation into the death of one Sylvester Oromoni of Dowen College, Lekki, is currently ongoing.
The Lagos Police Command, in a statement issued by CSP Adekunle Ajisebutu, said that although no formal report had been made to it, the Commissioner of Police, CP Hakeem Odumosu, had ordered the investigation of the death.
“The Lagos State Police Command is not unaware of the reported death of one Sylvester Oromoni, a 12-year-old student of Dowen College, Lekki, Lagos, which is currently going viral on the social media.
“The Commissioner of Police, upon hearing about it, instantly directed the Divisional Police Officer, Maroko Division, under whose jurisdiction the place of incident is, to immediately visit the school to carry out initial investigation into the incident.
“This directive has been carried out as investigation into the case has since commenced.
“However, in view of the seriousness of the case, the Homicide Section of the State Criminal Investigation Department, Panti, has also been directed to take over investigation of the case immediately.” he said.
Ajisebutu, in the statement, further said that members of the public should avoid taking laws into their hands as the command has assured the bereaved family of justice.
“Members of the public, particularly the deceased’s bereaved parents, friends and relatives, are assured that the Lagos State Police Command has deployed all available human and material resources at its disposal to unravel the circumstances surrounding the sad and unfortunate incident. 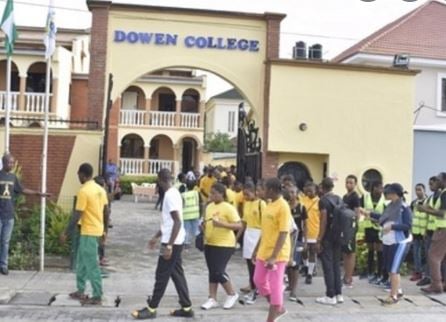 “While diligent investigation is ongoing, members of the public are advised against taking the law into their own hands. They are also enjoined to refrain from comments that could jeopardize investigation.
“The Commissioner of Police, CP Hakeem Odumosu, while commiserating with the bereaved family, has equally assured that the outcome of police investigation would be made public in due course,” he said.
The News Agency of Nigeria (NAN) gathered that Oromoni, was reported dead on Wednesday, Dec. 1 by a Twitter user, @perrisonoromoni who claimed to be the deceased’s cousin.
According to @perrisonoromoni, the deceased was bullied and beaten by fellow students which led to his death.

However, Dowen College, in a statement, denied all allegations, stating that Oromoni only complained of body pains from playing football.

Dowen College also directed students to take Friday, Dec. 3 off, and resume on Monday, Dec. 6 following the incident and to also enable the students study for exams.

@perrisonoromoni subsequently put out photos and video evidence, which showed the bruises on the deceased’s body.

The Lagos State Ministry of Education, however, on Friday, Dec. 3, announced the indefinite closure of Dowen College, Lekki, pending the outcome of investigation into the boy’s death. (NAN)