Hon. Justice Edward Asante, President, ECOWAS Court of Justice, has warned that the non-enforcement of the decisions of the 20-year old court could imperil its role in the region’s integration

In a statement on Wednesday in Lagos, Asante said that it would also affect the promotion of good governance, accountability and political stability, through the exercise of its human rights mandate.

According to him, only six of the 15 Member States had complied with their obligations under Article 24 of the protocol on the court.

He said that the protocol required that decisions of the court are to be executed by member states, in accordance with their Rules of Civil Procedure.

”This is particularly the requirement that determines the competent national authority for the purpose of receipt and processing of the execution and notify the court accordingly,” he said. 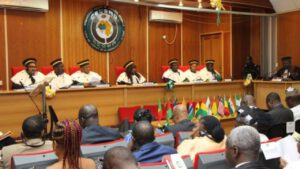 The court president noted that only a few member states had complied with the provision and appealed to political and judicial authorities of Cote d’Ivoire to discharge its treaty obligation by appointing such an authority, as soon as possible.

”Only the Republics of Burkina Faso, Ghana, Guinea, Mali, Togo and the Federal Republic of Nigeria have designated such authorities for their countries,” he said.

Asante noted that by its initial protocol, the court had the sole mandate of the observance of the law and justice, in the interpretation and application of the ECOWAS Treaty and the other Community texts.

He said that the mandate was expanded by the 2005 protocol which granted individuals direct access to the court and also gave it the mandate as human rights court, a court for community staff.

“The court is aware of its key role in the integration process of the community and as the guardian of the community law and protector of human rights, which had become the dominant aspect of its judicial functions.

”The international community has recognised the evolving ECOWAS human rights regime, its unique feature being the absence of the requirement for the exhaustion of local remedies before approaching the regional court.

“Community citizens, therefore, have the option of lodging complaints for human rights violations before their National court or the ECOWAS court of Justice, without the need to first exhaust local remedies,” he added.

Asante, therefore, urged the court to cooperate with Member States, to maintain its credibility and the image of a viral and independent regional Court. (NAN)