The hallmark of productivity is improvement in quantity and quality. If one of these standards is sacrificed for the other, needed development is compromised. This argument is so valid in our tertiary education sector today.

The demand for higher education in Nigeria, spurred by urgent national development needs, is enormous hence the need for more Universities.

However, it is counter-intuitive and counter-productive to establish more when most existing universities are ‘glorified secondary schools’, poorly resourced, poorly managed, and sometimes not fit for purpose.

The National Universities Commission (NUC) has indicated that it intends to increase university capacity by supporting the creation of new private universities. But indications show that the commission has not focused on scholarly output and quality of teaching.

Ordinarily, the increasing number of universities in Nigeria should be a source of excitement, especially in the educational sector. An increment in number means increased competition and increased choices, which should lead to better standards. However, the situation with Nigerian universities seems not to support this axiom. As the numbers of universities in the country increases, the standards seem to decrease. It is an ironic situation where competition does not seem to drive quality standards. 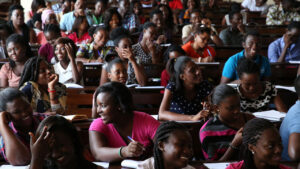 In the most recent report released by Webometrics, a respected authority in the ranking of universities globally, no Nigerian university made it to the top 1,000 universities in the world. The report stated that the highest ranked Nigerian university, the University of Ibadan, is placed 1,258 globally and number 18 on the continent of Africa, far behind universities from South Africa, Egypt,Ghana, Kenya and Uganda.

In terms of knowledge production through research, “Nigeria’s universities produce only 44% of the “scholarly output” of South Africa and 32% of Egypt. This is even though Nigeria has nearly four times more universities than Egypt and over six times more than South Africa.”

These rankings tell a gory story of the state of university education in Nigeria and it’s gradual decline to global irrelevance. It is not the best way to showcase the state of education in a country touted as the giant of Africa, a country endowed with enormous human and material resources.

Universities aim to help people acquire academic skills, professional expertise and knowledge. These enable individuals to develop into valuable members of the community. The universities achieve these through teaching, researching, and disseminating existing and new knowledge, pursuing service to the community and being a storehouse of knowledge.

Also, it aims to inculcate proper value orientation, provide an objective view of the local and external environments, and improve individuals’ intellectual capacities to understand and appreciate their environment. Given Nigeria’s peculiar circumstances, universities should strive to close the gap in life skills of leadership, entrepreneurship, innovation, and technology adoption.

In this time where the battle for universities’ essence and heart and soul are contested in the public sphere, it is vital to reiterate the benefits of university education. It gives students the capacity for creative and independent thought. Other benefits include providing long-term financial gain, job stability, career satisfaction and success outside of the workplace.

With more and more occupations requiring advanced education, a university degree is critical to the success of the average youth in today’s workforce. The pertinent question is, are Nigerian universities adequately fulfilling their aims and providing adequate benefits to society and especially the youths?

It is time to rethink university education to make it fit for purpose and a tool to help Nigeria leap-frog development. This calls for leadership. Education leaders in Nigeria must articulate a clear vision for our universities and sell this vision to society so that all stakeholders will work collaboratively to improve the universities.

The current situation where, in most Universities, Vice- chancellor’s function more as project managers, interested in civil contracts than as leaders of the academic community, must change. Incessant strikes by university workers, especially lecturers, have reduced our universities to “burial grounds” where people gather periodically to bury quality education.

ASUU, the abbreviation for Academic Staff Union of Universities, the principal trade union of university teachers in Nigeria, has become a byword for frequent disruption in academic studies occasioned by trade disputes between lecturers and the government on one hand and lecturers and the university administration on the other hand. 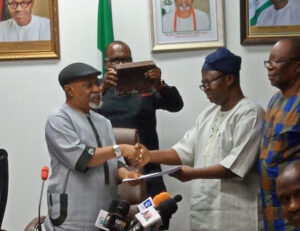 *ASUU President and Minister of Labour, during one of their negotiations on strike actions

Between 2019 and 2020, Nigerian university students spent almost one year at home through a combination of ASUU strikes and the COVID-19 pandemic. As a result of incessant ASUU strikes, some students spend upwards of seven years pursuing a four- year programme.
The disruption of academic programmes of institutions of higher learning affects students learning outcomes since lecturers find it difficult to complete the course work.

In most cases, a semester’s course work is sandwiched into few weeks during which lectures are rushed to accommodate the time lost to strike. It has also contributed to the culture of “ bow and go” at project and thesis defence which has crept in from the political space to the academic environment. This type of academic rush is a significant threat to the attainment of quality in higher education in Nigeria.

While the United Nations Educational Scientific and Cultural Organisation, UNESCO, recommended that governments of developing nations like Nigeria should allocate between 16-25 per cent of their budget to education, the federal government allocations to education in Nigeria rarely go beyond 7 per cent, a far cry from internationally recommended standard.

In the 2021 Budget, the federal government proposed N197 billion for education out of a budget estimate of over N13 trillion.
There is also the brain drain problem, which has seen a mass exodus of brilliant and most talented lecturers to other countries of the world and other sectors of the economy.

In the 1960s to early 1980s, several foreigners were in the nation’s universities as teachers and students. Today, the story is entirely different. In recent times a lot of lecturers have left Nigerian universities to join the business world. Some joined politics while others left Nigeria for greener pastures abroad. The import of brain drain is a decline in research outputs from institutions of higher learning in Nigeria.

The prevalence of lack of quality lecturers
is embarrassing. In some public universities, some lecturers are engaged on political consideration and not competence. Agreed, the challenge of quality academic staff is more pronounced in some private universities who find it difficult to pay the salaries of competent staff, unlike government-owned universities.

There have been scandalous cases where some lecturers in both public and private universities sell handout as means of survival and not for the benefit of the students.

There are no simple solutions to the myriad of problems facing Nigerian universities, but the key indeed lies away from establishing more universities, at least for now, until quality improves. In some cases, federal and state governments establish universities due to some primordial considerations and political calculations.

Also, in our various states, we have situations where incumbent state governors either move the permanent site of the state university to their local communities or establish campuses there. In most cases, it becomes a merry go round as every governor takes a turn to develop campuses in their communities.

These acts by these state chief executives, which leads to the proliferation of university campuses, hardly take into consideration infrastructure logistics issues and the extant needs of the university. It leads to some universities becoming pawns of politicians rather than places of academic excellence.

To get it right in Nigerian universities, the government should never make promises to lecturers, which the incumbent administration or subsequent administrations cannot fulfil. The usual practice of allocating a meagre 7 per cent of the budget to education does not reflect a serious intention to improve the quality of education in the country.

The UNESCO recommended 16% -25% of educational spending should be aspired to and met. If the government and other stakeholders give adequate funding and desired attention to the sector, it can become a great source of revenue for the country.

An improved educational system in the country can attract international students through which government can generate foreign exchange, which can be used to finance the education of locals and improve the infrastructure in our universities.

They should create enabling environment for staff through improved conditions of service, provision of basic infrastructure and tools required for effective functioning of universities, virtual libraries, and information communication technologies and internet connectivity. They should create research-friendly environments to encourage creativity and innovation.

In the Western world, the private sector is heavily involved in the funding of university education through grants and endowments. This is an area that must be well explored in the country. Large companies and corporations should be encouraged to dedicate part of their profit to the funding of our universities as part of their corporate social responsibility.

Instead, what we have is an invasion of the university sector by all sorts of characters masquerading as educational investors. The concentration of all and sundry in the educational sector should be not in getting more universities to be established but rather to see that the ones already on the ground are of excellent quality.

Dakuku Peterside is a former Director General of NIMASA